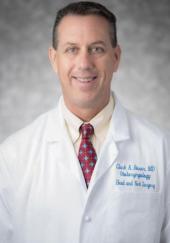 Clark Rosen, MD is a Director of the UCSF Voice and Swallowing Center, Chief of the Division of Laryngology, Professor of Otolaryngology-Head and Neck Surgery.

Dr. Rosen has had amazing productivity as a clinician scientist. He has authored over 160 peer reviewed publications, 30 book chapters, 5 books including being the co-editor for Bailey’s Head and Neck Surgery-Otolaryngology which is one of two main textbooks in our field. Dr. Rosen also authored (with Blake Simpson MD) a key operative atlas, Operative Techniques in Laryngology which has international reach and has been translated into to Mandarin and Spanish.

Dr. Rosen has been a Co-Investigator on numerous NIH grants as well as grants from the Triological Society, the VA, and private industry.

Dr. Rosen has been a sought after speaker internationally and has had major service to multiple publications and professional societies. He is a founding member of the Fall Voice Conference, is the Vice Chair of the Annual Meeting Program Committee for the American Academy of Otolaryngology-Head and Neck Surgery (AAOHNS), and is the Treasurer of the American Laryngological Association (ALA) which puts him in line to be the president of the ALA.